2016 Was a Record Breaking Year for Solar!

2016 Was a Record Breaking Year for Solar! 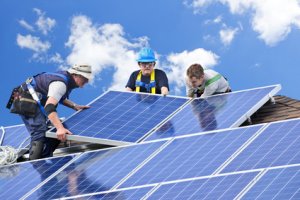 By Theresa Ficazzola 2016 was a record breaking year for solar in the U.S., according to GTM Research and the Solar Energy Industries Association (SEIA).

For the first time, solar was the number one source of new electric generating capacity, outpacing other forms of renewable energy, such as wind and natural gas. Solar accounted for 39% of all new electric capacity added to U.S. electrical grid, while natural gas represented 29% and wind 26%.

According to the SEIA, while California has traditionally dominated the U.S. solar market – with 35% market share in 2016 – other markets are continuing to expand, including Massachusetts, Utah, New York and Texas, where much of the future growth is expected to take place.

By state, South Carolina and Texas grew significantly within the residential sector, while Georgia, Minnesota and Utah expanded the most in the utility sector.

Even though all solar market segments grew in 2016, the largest growth came from the utility sector. The utility PV market accounted for 72% of solar capacity installed, a 148% increase over 2015.

While the residential solar market slowed from record growth rates over the past several years, its 19% annual growth rate is still positive. The top five markets still represent almost 70% of national installations and several new markets, such as Utah, Texas and South Carolina are ramping up.

Non-residential PV grew at its fastest pace since 2011, driven by California and Massachusetts, along with a large community pipeline in California, Minnesota and Massachusetts. Large corporate customers accounted for an unprecedented 10% of annual capacity in 2016.

Total system pricing continues to trend downward across all market segments, with a quarterly price decline of 3% for the residential market. That’s good news for homeowners who are thinking about installing solar panels on their roofs.

While the residential and non-residential PV markets are both expected to grow in 2017, the overall solar market is expected to drop about 10% as utility PV projects decline. By 2018, challenges, such as the cost of acquiring new customers and unknown regulatory and policy constraints may cause a further decline in the industry.

However, despite these challenges, the SEIA expects the cumulative U.S. solar industry to nearly triple over the next five years.

“It would be hard to overstate how impressive 2016 was for the solar industry,” said Abigail Ross Hopper, SEIA’s president and CEO. “Prices dropped to all-time lows, installations expanded in states across the country and job numbers soared. The bottom line is that more people are benefitting from solar now than at any point in the past, and while the market is changing, the broader trend over the next five years is going in one direction – and that’s up.”

To learn more about how solar energy can power your home, save you money, and help reduce greenhouse gases to save our planet, contact SI Solar, a locally owned and operated solar company serving Staten Island, Brooklyn and New Jersey.